But are we going the RIGHT way?” Gary’s knuckles whiten on the wheel.

The HEMA app says there’s no road, but it’s impossible to argue with the wide red track graded through the mallee right before our eyes.

I check my topographic map. It agrees with HEMA. “The map shows this as a cleared line through the scrub. The track is on a cleared line.”

We stare at each other and shrug.

It wasn’t the first time in the past few days we’d felt like complete newbies, stumbling about in the dark.

A lack of information about our route, a new camper trailer, and, for the third or fourth time, a bush track not matching the map gave us the sense of jumping off a precipice, into the unknown.

Five days. Bugger all info. Our first experience with a camper trailer…

It was a shakedown run we’d never forget.

Long before we’d hitched the camper trailer to the car, we’d decided on at least part of the route: we wanted to explore the old Morgan Mail Road.

What’s more, we’d heard there were red sand dunes and spinifex, so of course we wanted to go! 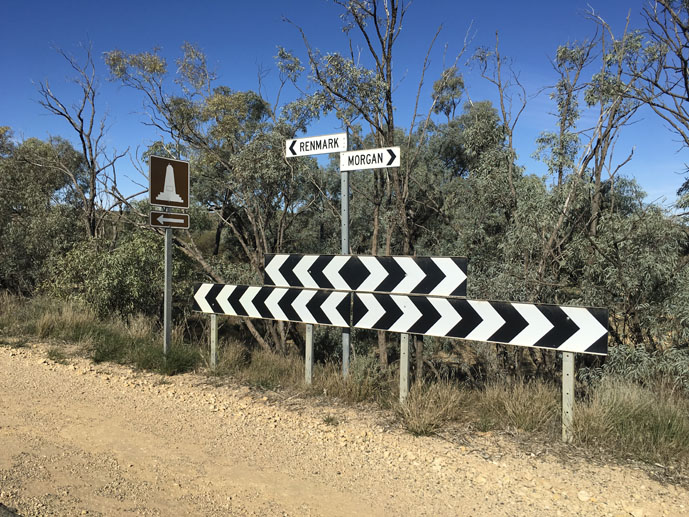 The tantalising start of the Morgan Mail Road

Researching the Morgan Mail Road online we found very little, and what we did find was conflicting.

Was it a public road or a track through pastoral properties requiring permission?

Could we expect corrugations and sand, or gravel and stones?

And the biggest mystery of all: where did the Mail Road actually end?

It took some digging about in old 4WD forums and consultation with outback legend and local, Rex Ellis, but we eventually answered the first question.

The Morgan Mail Road is a public road, and no permission was required to travel on it.

We were in business!

Which left the camper trailer…

Ezytrail Camper Trailers had kindly loaned us a Stirling Z camper trailer to put through its paces for our planned winter 2017 expeditions. 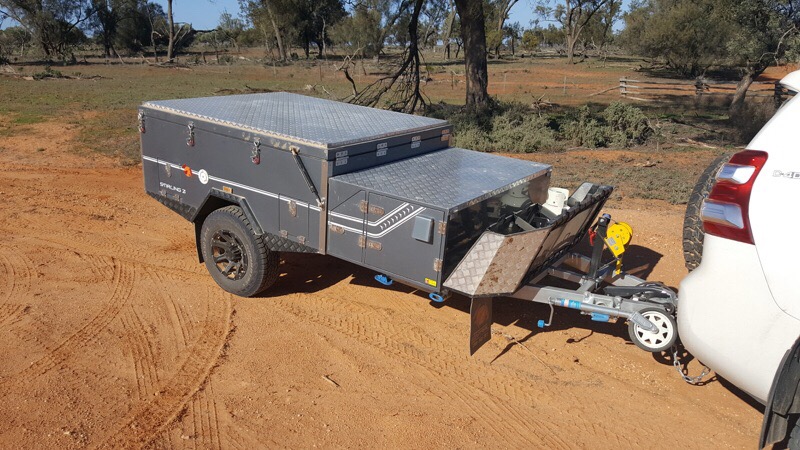 I was a little hesitant.

Years of camping in super remote locations for our jobs has left us as extreme minimalists.

A tarp, a swag and a pop-up mozzie dome with a fly for wet or cold weather are our usual camping style.

Even when we’ve done trips where we’ve stayed in one place for a week, we’ve only ever got as complicated as a 30 Second Tent.

So the camper trailer was going to be a completely new experience.

The Stirling Z is an off-road, no frills trailer. It’s a fold over design with a hard floor and a small lounge area inside. There’s just enough room for a table.

It might sound nuts, but I’ll admit to being thrilled at the luxury of a pull out kitchen with a sink.

As we had several trips into remote South Australia and the Simpson scheduled, the Stirling needed a decent shakedown run to iron out any kinks.

As it turned out, the kinks were mainly in ourselves…

There’s a saying in archaeology: expect the unexpected.

The Morgan Mail Road was just that: not what we’d thought it might have been.

The first section of road traverses a number of pastoral stations, where low growing blue bush and salt bush dominate the landscape as far as the eye can see. 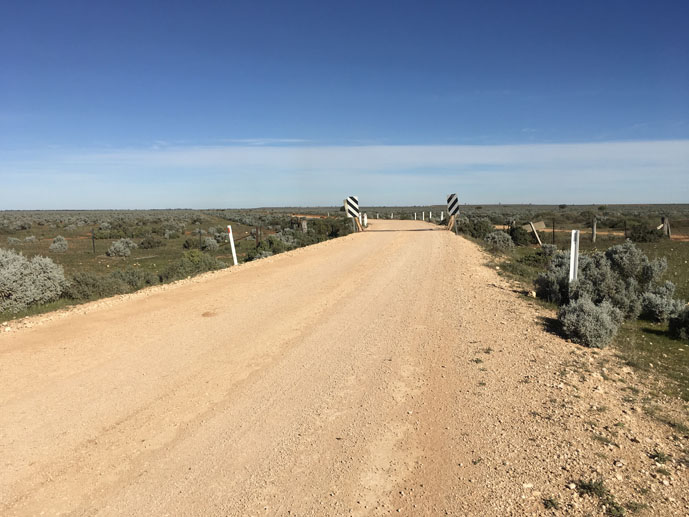 This is tough country for farmers and we were pleased to see sensible numbers of sheep stocked on the properties we drove through, meaning the bush was in excellent condition.

Approaching Canegrass Station, the county softens into Casuarinas and saltbush, then to mallee and some sections of spinifex.

What surprised us the most was the condition of the road.

Here, the Morgan Mail Road is wide, smooth, well maintained gravel, in such good condition a 2WD sedan wouldn’t find it any problem at all to negotiate.

And, this part is definitely caravan friendly, provided you don’t mind the dirt.

As the Mail Road continues towards Danggali Conservation Park through Pine Valley Station, it crosses some low dunes. 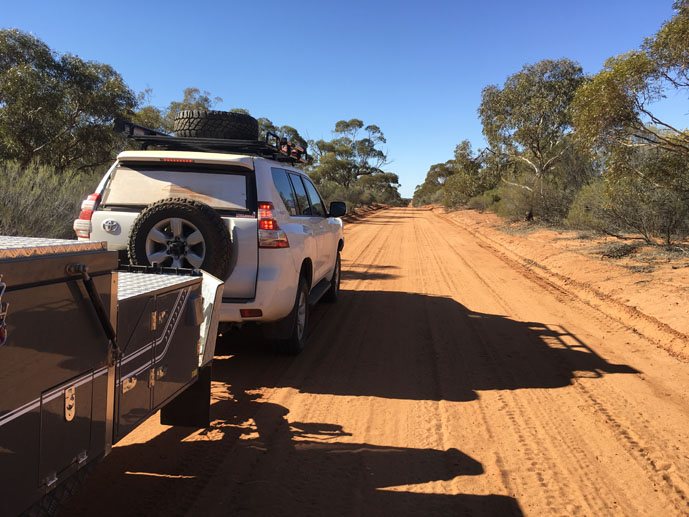 The fabulous road condition means that you could -literally- do it in your Gran’s Hyundai.

The Stirling towed well behind the car; in fact we scarcely knew it was there. The suspension absorbed any bumps, so the ride was surprisingly smooth.

It was only when we pulled off the road and into the bush for our first camp, things got a little shaky.

Despite our practice runs at home, it took us camper trailer newbies far longer to set up than it should have.

We forgot which internal struts went where, dithered about adjusting the roof height, and after we thought we were finished, realised we’d forgotten to take the gas bottle off the front rack. 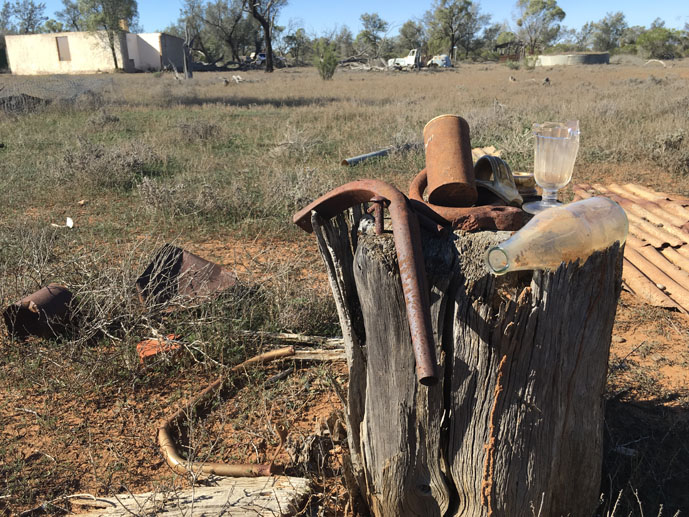 Packing up the next day, we weren’t much better. It was morning tea time before we pulled back out onto the road.

We could only get better, couldn’t we?

Over the next couple of days, we got better at setting up and breaking down the camper.

If nothing else, we at least remembered to remove the gas bottle from the front carry rack BEFORE folding the trailer out!

Our route along the Mail Road took us briefly into the top of the Danggali Conservation Park, an accessible outback wilderness few people visit. 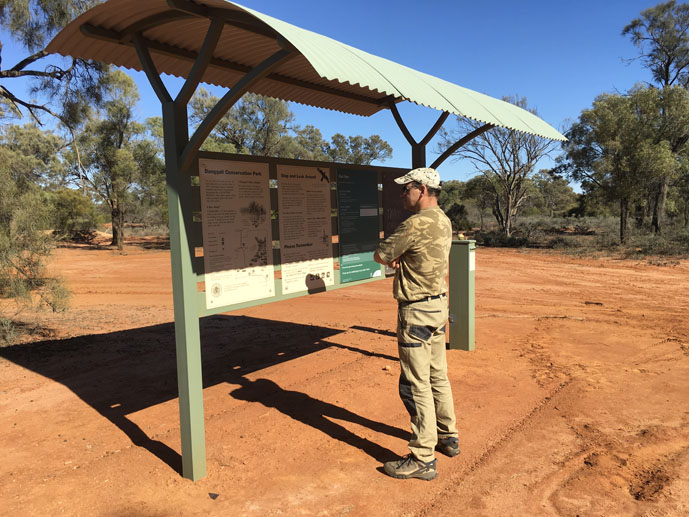 We were planning on having lunch at the abandoned Morgan Vale Homestead ruins, just inside the Park.

As we pulled up at the turn off to the Homestead, the mystery surrounding the Morgan Mail Road’s route deepened. 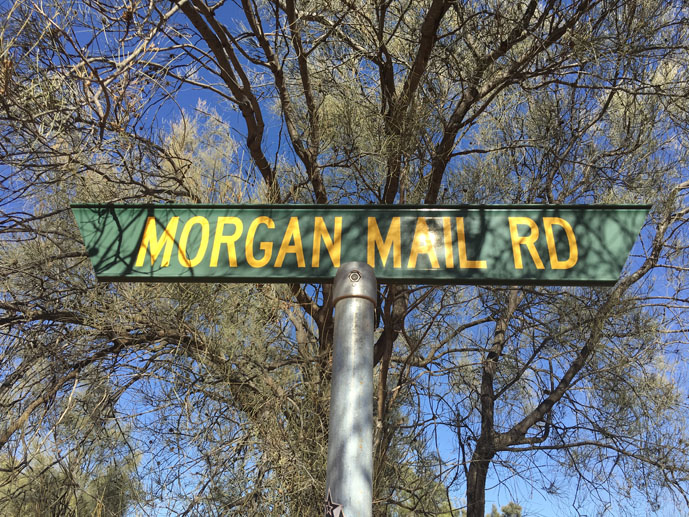 Instead of continuing north east towards the NSW border as we’d anticipated, the signpost had the road continuing south east, and deeper into Danggali.

Consulting the maps gave us no clue. On both the HEMA app and the topo, the Morgan Mail Road just disappeared.

The mystery wasn’t to be solved for several days.

Leaving Morgan Vale, we continued along our planned route, further north and into NSW at Loch Lilly Station. 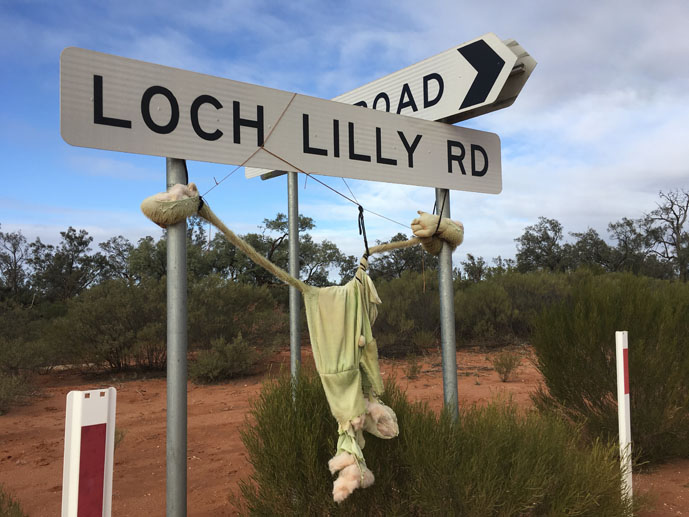 Once over border, the road became sandy and much more corrugated. This part wasn’t really suitable for towing ordinary vans or 2WDS.

There were also a number of gates. 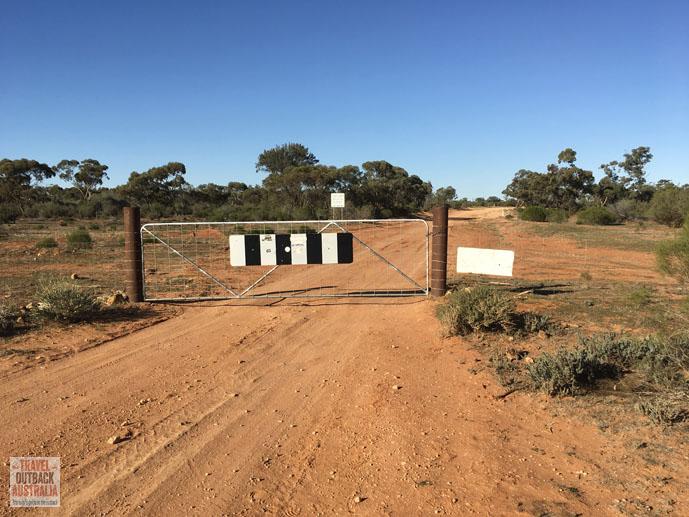 After another night’s free camp in the bush, we hit the Silver City Highway’s blacktop, and coasted southwards into Wentworth.

Following a visit to the Perry Sand Hills, we headed back into Danggali Conservation Park. 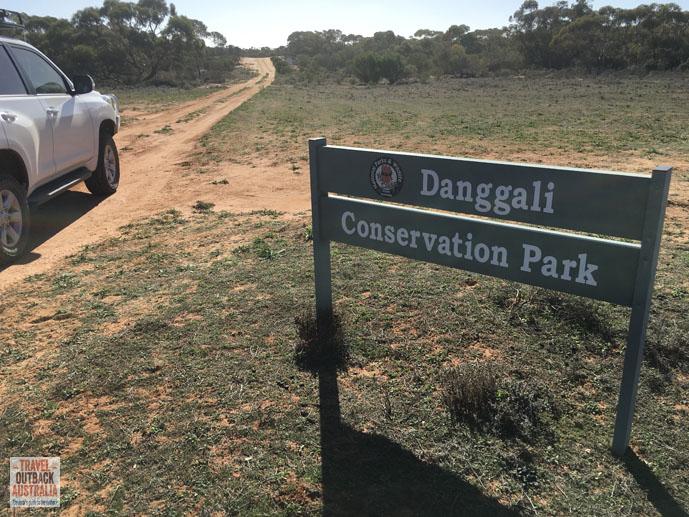 This is where both the HEMA maps and topographical maps are outdated. Neither shows the current route into the Park, so it’s just as well the track is well signposted.

Danggali Conservation Park is made up of three former pastoral stations: Hyperna, Canopus and Morgan Vale.

This means there is plenty of interesting pastoral history to discover on any of the 4WD loop tracks that sojourn through the Park. It’s also prime mallee fowl habitat – although I’m yet to see one in the wild.

As we arrived at the former Canopus Station homestead, we were stunned to find a sign for the Morgan Mail Road at an abrupt junction.

Once more, Gary and I looked at each other and shrugged. Just where did this road end?

It was mid afternoon by then, so we continued on, sightseeing.

One of the most unusual old station structures we encountered was this impressive wooden dam made from hand cut timber. 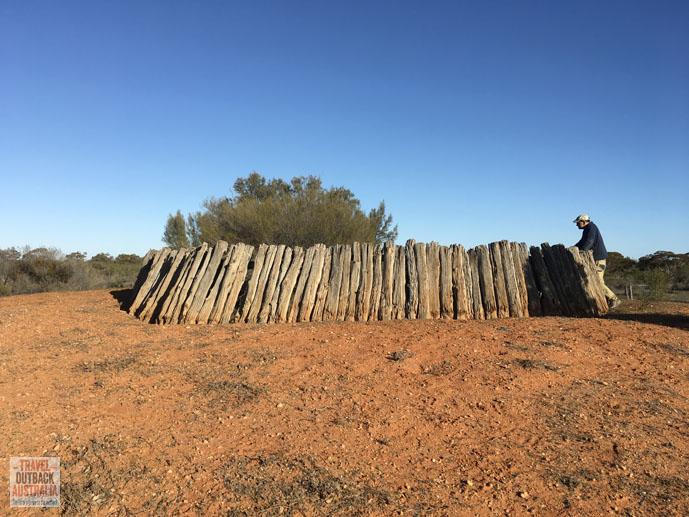 It’s hard to imagine it full of water, but apparently it worked quite well.

For me, however, the highlight was seeing something very rare: the remains of an Aboriginal wurlie (wooden hut). 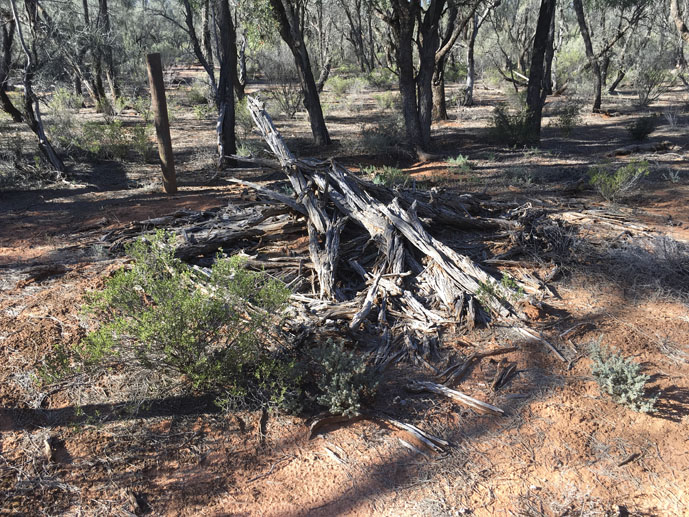 It might not look like much, but given the wurlie is more than 120 years old, I was thrilled to see that the termites and weather had left this much intact.

We spent a bitterly cold winter’s night in campsite 5, then packed up the trailer early to head back to Renmark. 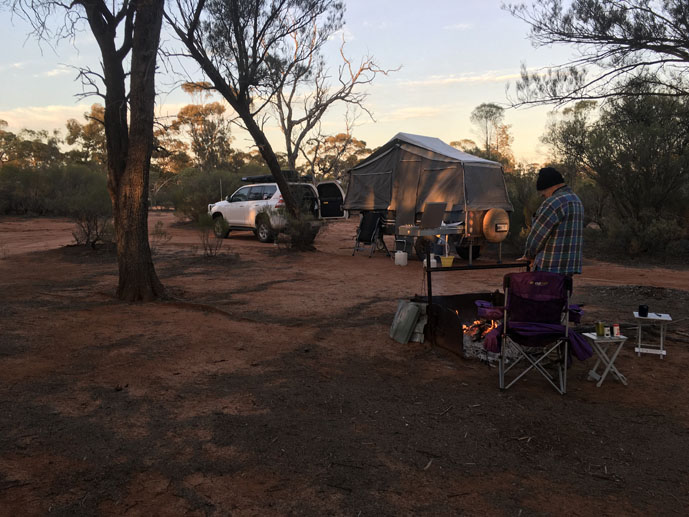 By this time, we had the trailer pack up down to about 15 minutes, although with our fingers at near frostbite in the -4C morning temperature, it was a painful experience.

Just after the Park’s exit we came across one of the rangers, and stopped for a chat.

It was here the mystery of the Mail Road’s end was solved.

The Morgan Mail Road starts (obviously) at Morgan and finishes at Canopus Homestead, right where we saw the sign.

Even more surprising, it was in use until the 1990s, with the mail truck coming up from Morgan and Burra several times each week, and returning the same way.

Stations directly south of Canopus, like Chowilla, were serviced by a similar mail route running from Wentworth to Renmark.

This wasn’t what we were expecting to hear, but then, this had been five days of the unexpected. Our Route, excluding Nanya’s Pad Loop and return to Waikerie

Arriving in Renmark a little over an hour later, we stopped in at the bakery. Over coffee and raisin toast, we reflected on our journey.

We’d graduated from beginners to novices with the camper trailer, decided that Danggali was a place to which we’d to return, and solved the Morgan Mail Road mystery.

Our shakedown run was over. The red dunes of Goog’s Track and the Simpson Desert lay ahead.

The start of the Morgan Mail Road is around 2.5 hours (km) from Adelaide, on the Goyder Hwy.

We took this trip at a leisurely pace, meaning we did the complete loop on the map in five days.

NOTE: this includes driving the Nanya Pad Track in Danggali, then returning to our Riverland house via Renmark, Loxton and Waikerie -these are NOT included on the map.

$130 diesel, $70 food (not including trips to several bakeries). $12 to camp in Danggali Conservation Park.

Free camping with no facilities along roadsides through pastoral properties, within the road reserve.

Our thanks to Ezy Trail Camper Trailers for the loan of the Stirling Z.

This article was originally posted by Travel Outback Australia.