We had to stop counting wombats.

They seemed to be everywhere, their chubby brown bodies lazing on the sides of burrows, soaking up the afternoon sun.

As we wound our way into the Gawler Ranges National Park from the north, southern hairy nosed wombats, a threatened species in some places, came out to greet us in force.

And there was not another soul around.

Over the next four days, wildlife and solitude were words we would utter again and again as we ventured along the 4WD tracks, walking trails and immersed ourselves in the cultural history of the Gawler Ranges National Park. 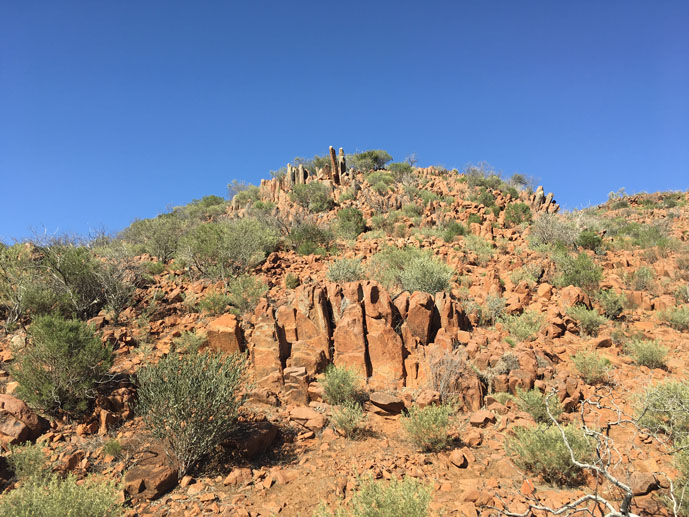 You won’t find yourself fighting for a campsite site or avoiding packed tour buses in the Park’s 1629 square kilometres.

Bumping along one the Park’s many 4WD tracks in peak season (winter), most of the time we had the place to ourselves.

And, the Gawler Ranges are -literally- teeming with wildlife.

We found there was enough to see and do to fill in three or four days – much more, in fact, than the information on the National Park’s website suggests.

If I had to pick one reason to visit the Gawler Ranges National Park, it would be wildlife. 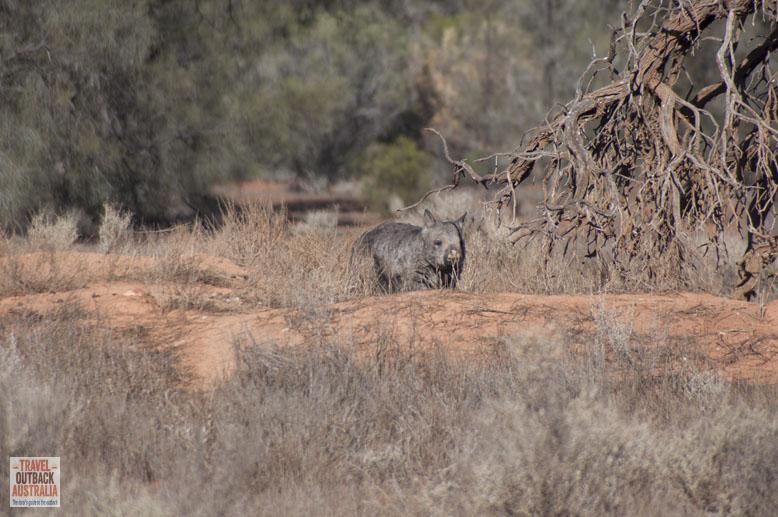 Take a drive from mid afternoon onwards, and you’re surrounded.

Want a ‘coat of arms’ photo with an emu and a kangaroo? This is the place to visit.

The striking landscape itself is another reason to visit the area.

Characterised by the jutting rhyolite pillars and hills topped in large, rounded granite domes, the Gawler Ranges were formed by a dramatic, short-lived series of volcanic eruptions about 1,600 million years ago. 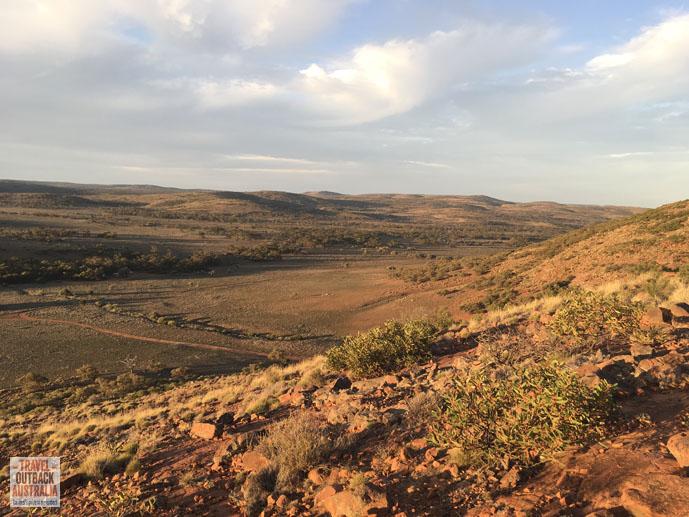 Take any of the (VERY!) short walks adjacent to camping areas and you’ll encounter the rhyolite pillars which the area is renown for.

Probably the best known place on the Park is the Organ Pipes. This is reached by a good 4WD track, approximately 10 km long, located in the Park’s south eastern corner.

A short (500m) walk in takes you to the formation. 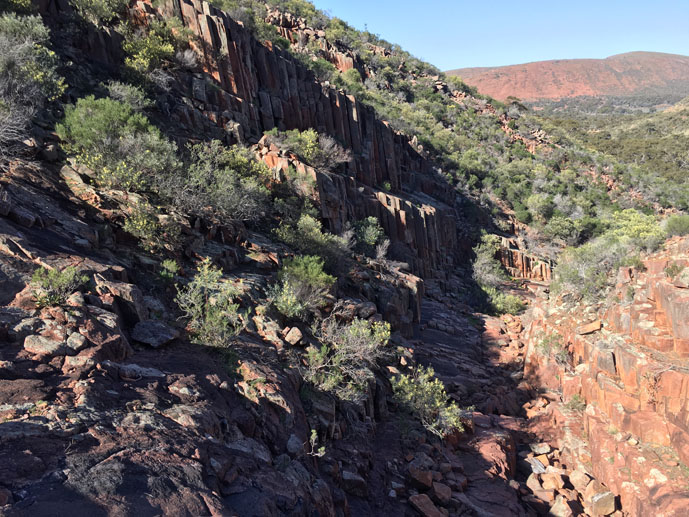 Our tip is to visit the Organ Pipes in the afternoon (especially in winter) to get the most striking photographs of these finger-like stones lit by sunlight.

If the wildlife and geology aren’t enough to convince you to visit the Gawler Ranges, then the 4WDing and scenic drives should.

There’s an extensive network of roads and tracks within the Park. 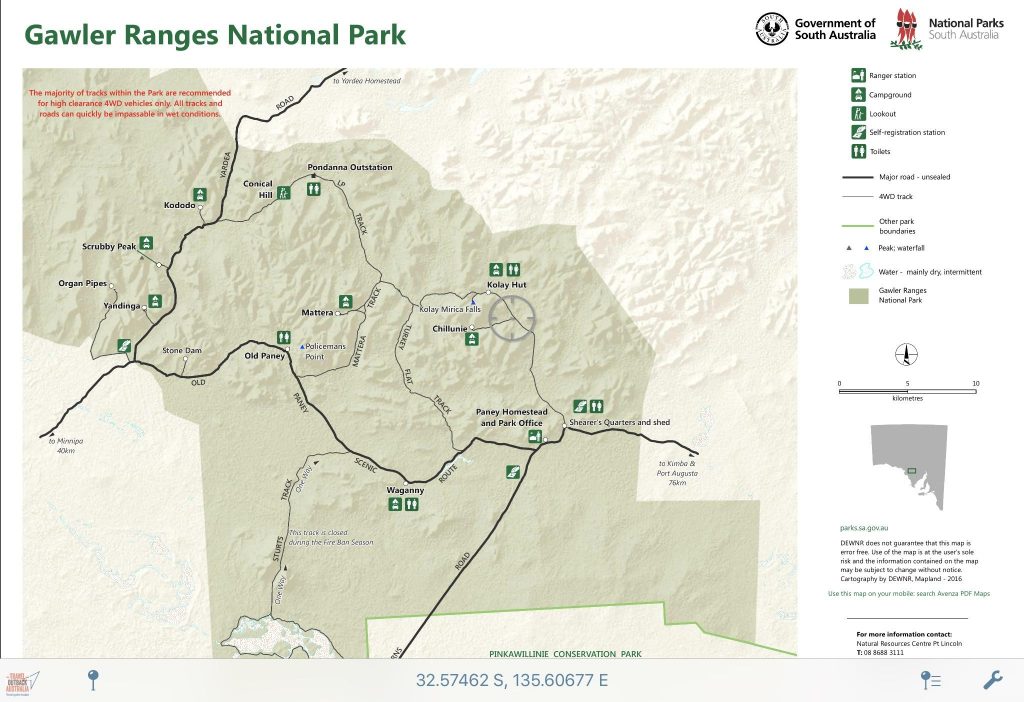 It’s possible to drive several different loops without retracing your steps, depending on where you’ve entered the Park.

2WD routes include the Old Paney Scenic Route, which enters the Park from the Iron Knob- Port Augusta Road, extending to the Minippa Road in the south west.

Another 2WD route comes in from Yardea Station and the privately run Hiltaba Nature Reserve in the north west.

We found this the best for seeing wombats and other wildlife in mid-late afternoons. 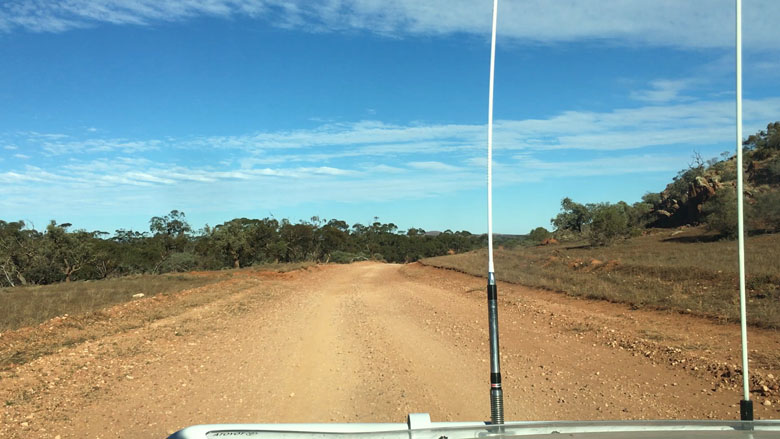 From the south-east (Barns Road from Wudinna), you can choose Sturt’s Track (4WD recommended) which is approximately 30 km in length.

The track winds around claypans and salt lakes before heading north, skirting the base of Mt Sturt.

Other 4WD tracks within the Park include the LP Track, which winds through wide, open valleys past the Pondanna Outstation (where you can stay) and over some rocky hills and creeks before reaching Kolay Mirica Falls and the Kolay Hut campsite. 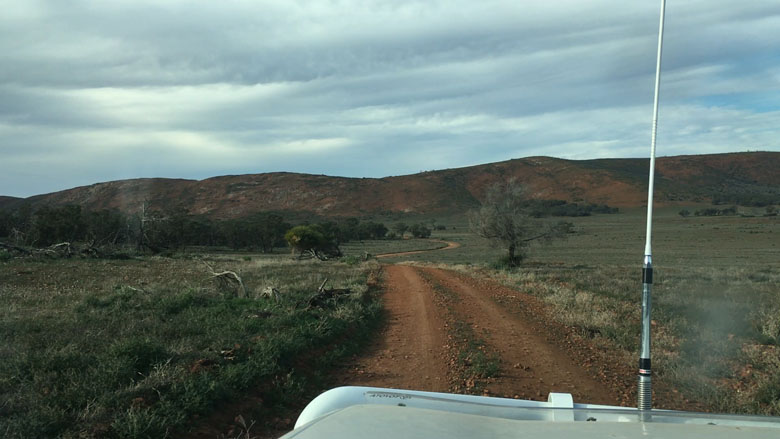 Exploring shorter 4WD tracks, such as the Turkey Flat and Mattera Tracks entice you to see more of the Park’s pastoral heritage and extend your stay.

At present, there is little information on the Park about the Aboriginal people who lived in the Gawler Ranges for thousands of years and whom continue to maintain their cultural connections today.

Place names such as Yandinga, Kolay, Wanginny and others hint at the Barngala (Parngala), Kokatha and Wirangu peoples of the area, though we had to dig deep to find out more.

The mysteriously named Policeman’s Point near the Old Paney Homestead had us wondering about relationships between early pastoralists and Aboriginal people, and of the police involvement in these interactions. 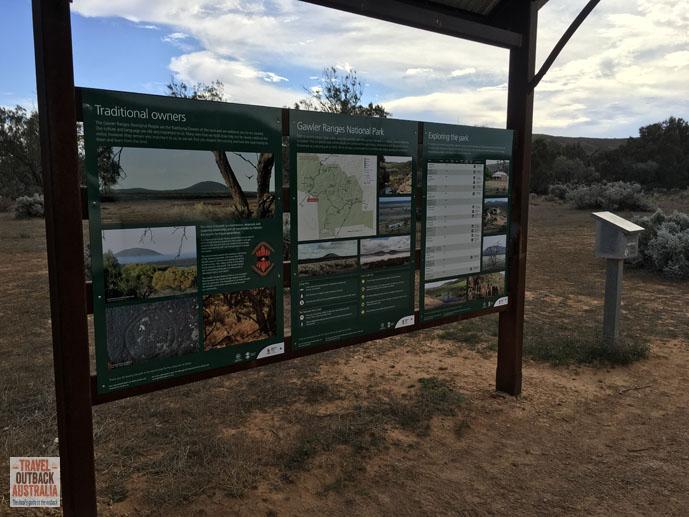 Wandering off track into the steeper hills near Kolay Hut, I found a scattering of quartz flakes and blades (stone tools), but nothing like the number I was used to finding in Central Australia. 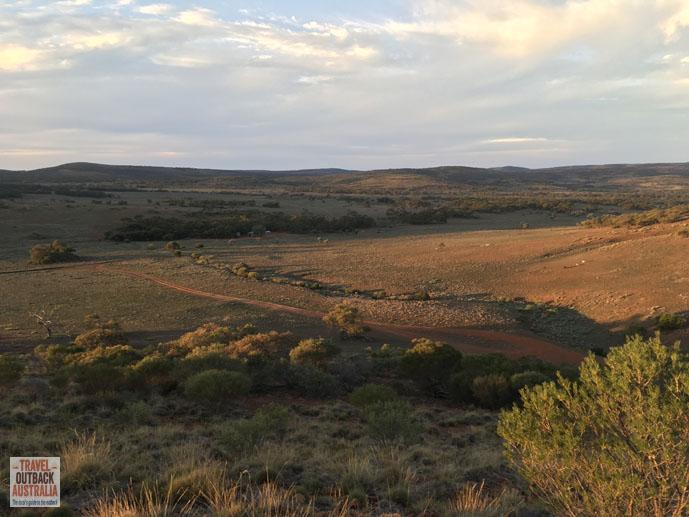 It was apparent to us that this was tough country for anyone to survive in.

Unlike the MacDonnell and Flinders Ranges, there are no deep gorges with permanent waterholes in the Gawlers. 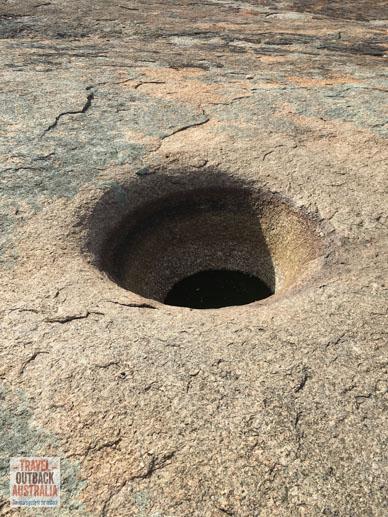 They also dug the transverse roots of mallee trees and squeezed out precious stores of water from them. 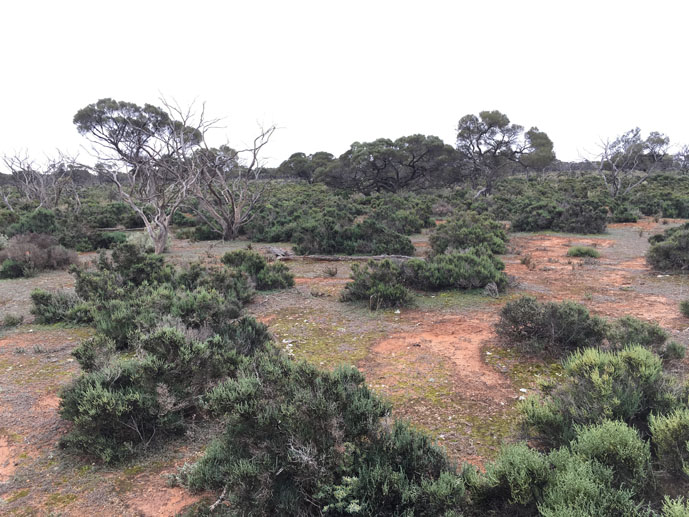 Some of our questions were answered when we met up with Aboriginal ranger, Clifford Williams, whose family we know from Hermannsburg (NT).

Aboriginal Traditional Owners are now extensively involved in a rockhole maintenance program, where they document, clean and monitor these essential water sources.

Clifford explained to us how local Aboriginal people used the rockholes at the tops of hills for human consumption only, covering them with pine branches or logs to keep animals out and evaporation down.

Lower down, rockholes were partly covered, allowing animals access to water. These rockholes also provided hunting areas where people would spear kangaroos, euros and other animals as they came to drink.

The relationship between Europeans and Aboriginal people in this tough environment was often a difficult and ambiguous one.

Conflict over water supplies, stealing of food and clothes, and spearing of sheep lead to violence.

A permanent police presence was established at Paney Station during the late 1860s, with an early 20th Century newspaper account describing the situation like this:

As with all country coming within the category of ‘ranges,’ the natives were troublesome, and mindful of certain outrages which had been perpetrated nearer to civilisation, the authorities of the period made commendable efforts to afford the outside settlers same semblance of protection (Chronicle, Adelaide, Saturday 24 November 1906, pg. 40)

But there was kindness and goodwill, too.

Yardea Station lease holder, James Grey Moseley, is on record as shooting at Aboriginal people (presumably to warn them off), but also as providing food and water in difficult times (The Advertiser, 13 September 1913, pg.6).

Despite the violence and displacement, Aboriginal people were able to survive in this country for millennia, whilst European settlers were often catastrophically beaten.

Besides wildlife and stunning, rocky vistas, the Park’s pastoral history granted us a glimpse into hard and often short lives in unforgiving country.

In 1839, explorer Edward John Eyre crossed the south west corner of the Gawler Ranges, naming them after South Australia’s governor at the time, George Gawler.

Eyre’s opinion of the Ranges foreshadowed the boom-and-bust settlement by Europeans to follow. He wrote that the land was: “…barren, rocky and naked in the extreme,” and his party unable to find any fresh water at all. 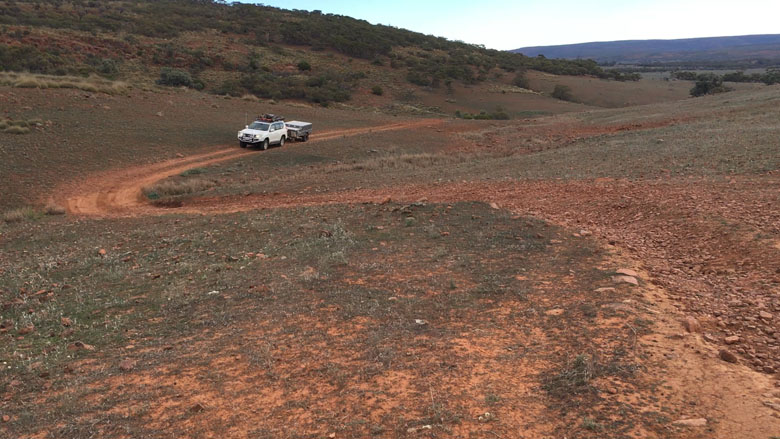 Five years later, explorer John Charles Darke was speared by Aboriginal people in the southern part of the ranges, which brought explorations to a halt.

It wasn’t until Stephen Hack’s expedition of 1857, assisted by four local Aboriginal men (who he actually named in his diaries), that ‘useful’ pastoral land around what’s now known as Yardea, Poondanna, Kodondo and Paney was documented.

Pastoral leases were taken up in the early 1860s, with two police troopers and a rations station for Aboriginal people established at Paney in 1868. 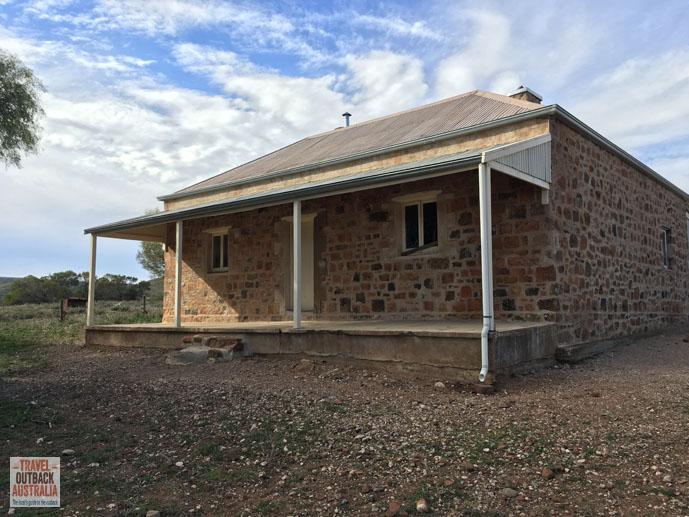 Ranger Clifford told us that the police had a network of stone huts around the Ranges, centred on the waterhole at Policeman’s Point.

The huts were spaced at about 1km apart, allowing the police to range large distances on their patrols. Little remains of them today, and even the locations of many have been forgotten.

By the 1870s, stations such Yardea and nearby Nonning were carrying up to 90,000 head of sheep.

By the time the east-west telegraph line and regular mail runs were established in 1896, many of the area’s sheep stations had been through a regular pattern of occupation and abandonment.

Drought, depression and high transportation costs saw pastoralists walk off the land in the early parts of the 20th Century

Numerous outstation huts and station buildings now converted for visitors to stay hint at a time when people relied on themselves and were at the mercy of the environment.

There’s no better way than walking to get a sense of the environment and landscape.

Nearly every campsite in the Park has a short walk to an Organ Pipes-like rhyolite outcrop, with a view. 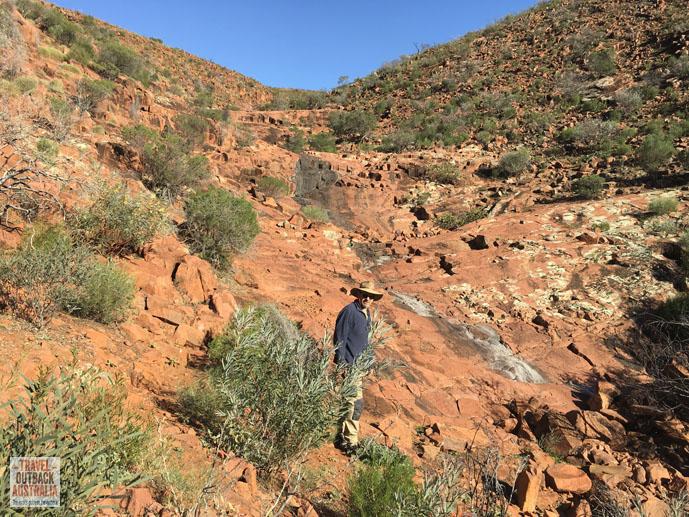 Whilst the 10km walk from Wanginny campground is the longest currently developed on the Park, longer walks are in the planning.

Short walks to the Organ Pipes, Kolay Mirica Falls and Yandinga Falls stand out as the ‘must-do’ short walks, with most of them less than 500 metres in length.

For more adventurous folk like us, the hills beckon. Climb any hill near one of the many campsites late afternoon and you’ll be rewarded with views like this: 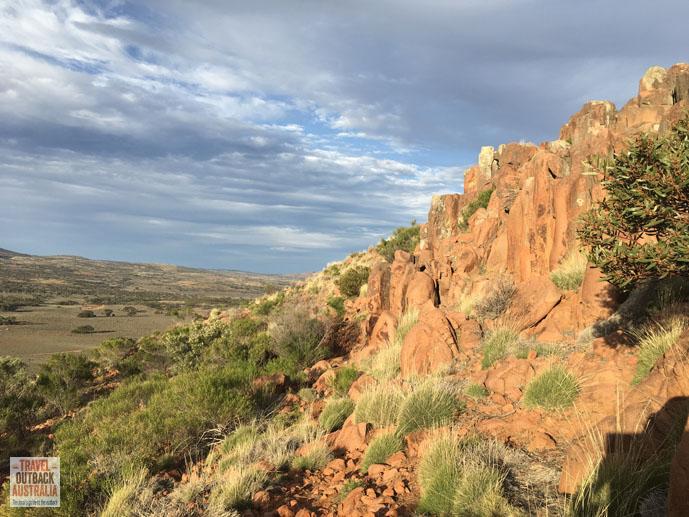 Autumn through to late spring (late March to early November) are the best times to visit the Gawler Ranges.

Whenever you choose to visit, from all reports we’ve read and what we experienced, you can expect peace and solitude – along with the emus, kangaroos and wombats.

One of the things that astounded us was the number of camping areas in the Gawler Ranges National Park.

We found seven different camping areas to choose from, spread out across the Park.

With the exception of Chillunie, all campsites have drop toilets (the rangers assure us that Chillunie will soon have one, too).

Every camping area has a few fire pits and room for camper trailers, too.

Some are better suited than others for off road caravans – read the details on the SA Parks’ website here.

We stayed at both Kolay Hut and Yandinga during our visit.

Yandinga was huge – lots of sites set in acacia and mallee, so make sure you drive around first before selecting a site. 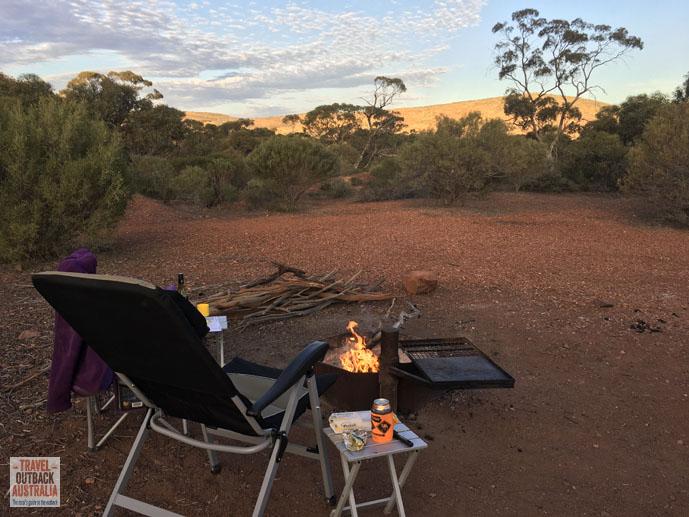 Unfortunately, the promised donkey boiler wasn’t working at Kolay Hut when we visited, but the campsite was peaceful and protected, nestled around a creek line.

We had both campsites to ourselves for the entire time we stayed. 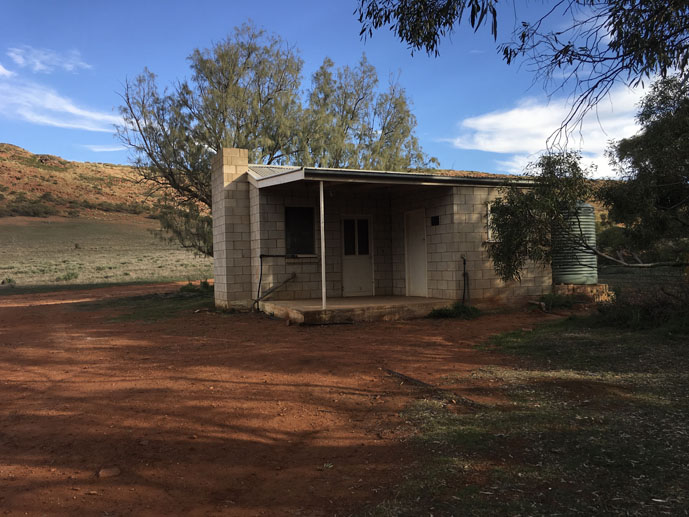 Firewood should be collected before you enter the Park (that won’t be a problem – there’s lots on the roadsides).

ALL campsites in the Park now need to be booked online which you can do here.

Pondanna Outstation and the Shearer’s Quarters at Paney are also available for as accommodation. For bookings and costs for either of these, please call : (+61 8) 8680 2090 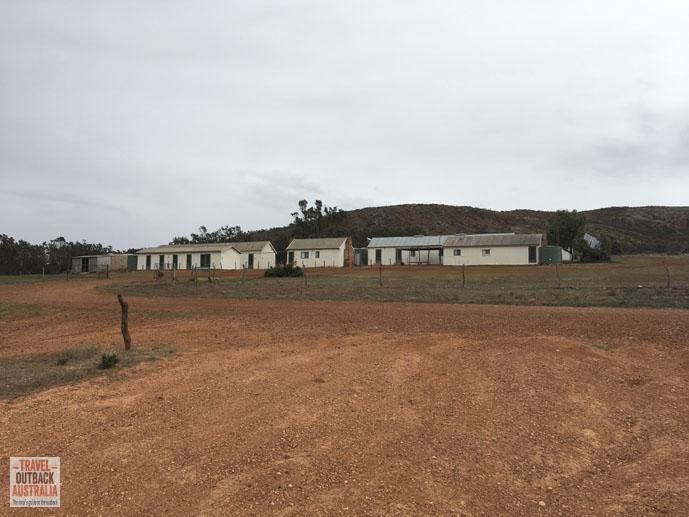 Of course, we can’t forget Mt Ive Station, near the eastern edge of the Park. 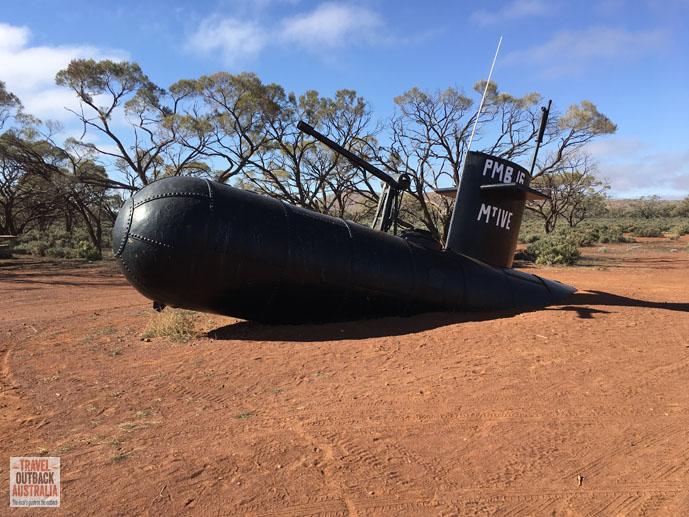 Campsites, shearers’ quarters and cottages are available, along with a small shop and a 250 km network of 4WD tracks.

Access to the southern end of Lake Gairdner (there is a cost for the access key) is also via Mt Ive.

Mt Ive deserves its own article, so we won’t say too much about it here.

The Gawler Ranges are located about 600km from Adelaide and 250 km from Port Augusta.

For more adventure, drive down from Kingooyna and Lake Gairdner in the north.

4WD recommended for all other tracks.

Fuel and limited supplies are available at Mt Ive Station.

Limited mobile phone reception (Telstra) is available in the southern parts of the Park IF you climb a hill.

This article was originally posted by Travel Outback Australia.