When it comes to viral images of caravans, none have circulated the internet quite like the pictures of this huge European double-deck caravan. Its called the KABE Tower and it turns out it is real with the almost mythical status of Europe’s largest caravan.

If you’ve spent as much time as I have to troll through the caravan and camping Facebook groups, you will have seen the viral images of the huge double-deck European caravan. Barely a week goes by when someone doesn’t share the images. And why wouldn’t they? It is an impressive looking vehicle, unlike anything we would see here in Australia. But have you ever wondered if the pictures were real? Does this massive caravan actually exist and, better yet, could you buy one? Well, I wondered about it too so I thought I would check it out. Turns out it is real. Its called the Kabe Tower and it is regarded as the largest caravan ever made in Europe.Advertisements

KABE is not a caravan brand that would be known to many Australians. In fact, until I started researching this story, I’d never heard of them before. KABE started making caravans and motorhomes back in 1957. Their head office, development department and production are all located in Sweden where they focus on manufacturing caravans and motorhomes that are suited to the Nordic climate.

The KABE Hacienda Imperial is 37 feet long. That’s almost half the length of a standard bowling lane. The interior is spacious, to say the least.

According to the sales blurb from one of their dealers, “KABE has always been a pioneer in the recreational vehicle market, in particular by contributing to the development of perfect heating and ventilation systems, among other things. A unique underfloor heating system, VarioVent’s patented ventilation solution – these are just some of the few details you won’t find in any other vehicle.”Advertisements

KABE’s product range is divided into three categories. CLASSIC, ROYAL, and IMPERIAL. They are designed to meet the varying requirements of their customers. As the sales blurb says, “Whether you need a smaller or a larger campervan, you can always be sure that you can enjoy a comfortable stay all year round in all KABE motorhomes with their high quality, safety and smart and unique solutions which are always important for KABE.”

The KABE range includes some very large caravans. The KABE Imperial Hacienda 1000 TDL is reputed to be the longest caravan available in Europe measuring a ridiculous 11.57 metres long. That’s more than 37 feet! More surprising is the weight or lack thereof. Its empty weight is just 2,475kg.

According to their website, KABE made the world’s first double-decker caravan back in the 1970s. Then around 2007, they made the Royal Tower. It was apparently a one-off; more of a PR exercise to commemorate KABE’s 50th-anniversary rather than a serious production model. Nonetheless, the Royal Tower was an instant sensation. It attracted worldwide attention and it is photos of this van that went viral across the internet. It’s fair to say the monstrous caravan didn’t harm KABE’s reputation in the European RV industry.

The first KABE Tower was built in the ’70s. There have been two more models since.

KABE have since made two more versions of the Tower, the last being the 2017 Imperial Tower 880 built to commemorate their 60th anniversary. It was displayed at the Swiss International Holiday Exhibition, also known as iViaggiatori, supposedly the most prestigious tourism event in South Switzerland. The original price tag was reported to be over 100,000 Euros or $150,000 AUD. That’s a lot of coin for a caravan in those days. That said, you got a lot of caravan for your money. At 15 feet (4.5 metres) tall and nearly 32 feet (9.7 metres) long, it would have dwarfed even the biggest caravans made here in Australia.

The KABE Tower is constructed in much the same way as all other European caravans using a lightweight chassis and composite panels. Despite this, it still weighed in at around 2,800kg empty which is almost unheard of in European caravans. You certainly wouldn’t be able to tow it with Britain’s most popular tow vehicle, the Skoda Kodiaq! Although I did see a picture of one being towed by what looked like a Volvo XC-90.

The luxuriously equipped caravan has a full 26 square metres of living space across the two floors including the rooftop terrace. According to the manufacturer, it has every conceivable option fitted. The lower floor of the Imperial Tower consists of a “spacious and elegant kitchen in the front, a bedroom with two large comfortable single beds and a spacious bathroom with a separate shower cabin. A spiral staircase leads up to the upper floor’s large cozy furnished living room with armchairs and a flat-screen TV.”

There’s no information about how many Towers KABE made or sold and I certainly couldn’t find a used one for sale online. The height of the caravan would have limited where an owner could tow it without losing the top section to a low bridge. I did find a video of the 60th anniversary Tower at what looked like a caravan sales yard. In any case, it doesn’t look like it was all that popular and KABE no longer advertise it as an option on their website.

Perhaps in 2027, KABE may produce another version of the Tower to commemorate their 70th anniversary. I wonder if Pat will send me to Switzerland to do a full review? I’ll just put it in my diary. 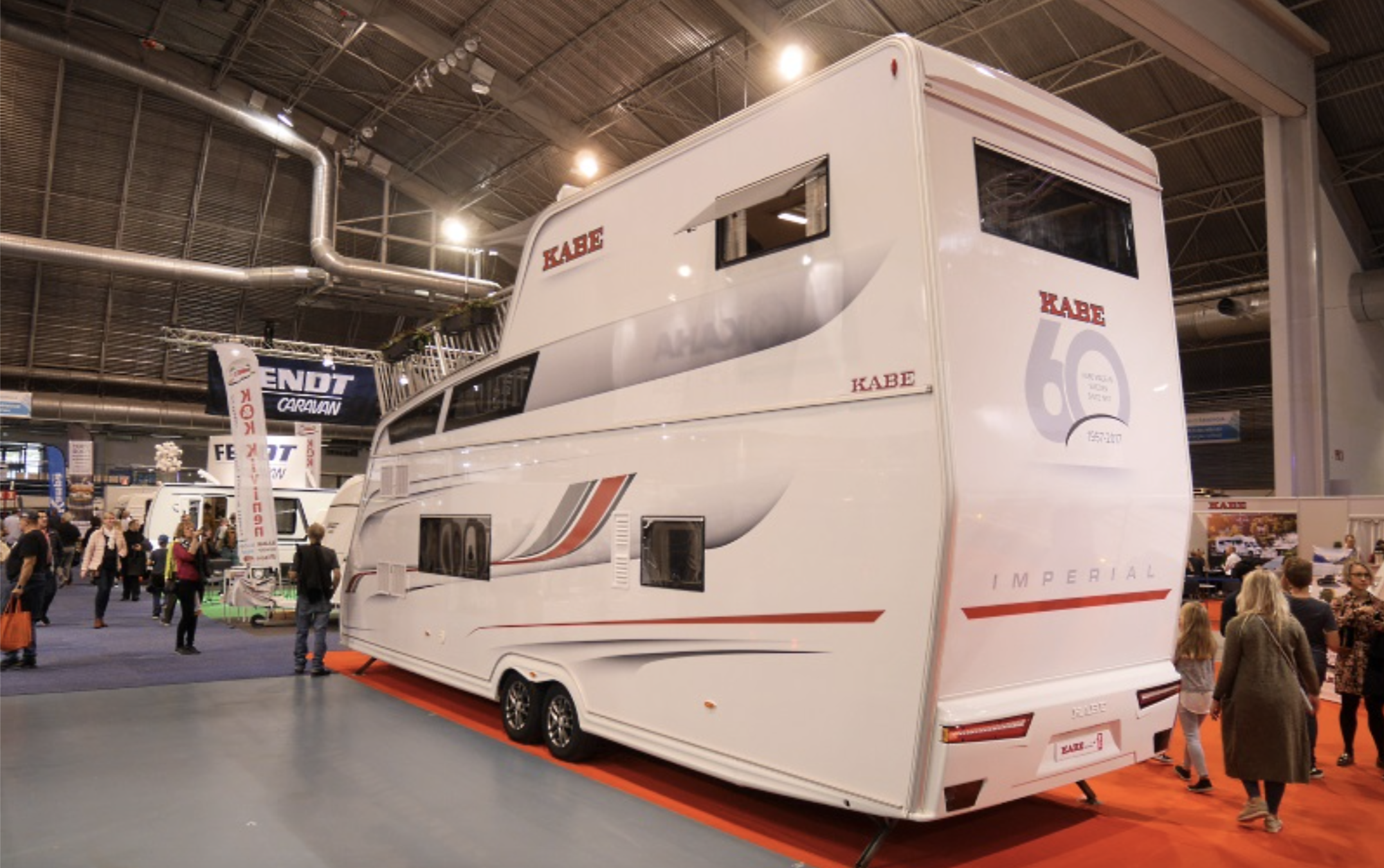 That is one BIG caravan..!